I’ve been waiting for a while to get a “real” post put up. Yeah, yeah, it’s been a while. I had to wait until I had both the time, and the internet access to do this.

There are a ton of pictures up on my Picasa site, which you can view here. There are old & new pics up there, but all the ones from the trip are sorted by date. Vacation pics start in the 7.05.08 folder and continue from there. The good stuff is here as follows (some of these pics were probably already posted. Deal with it) :

So we left out of Sequim on July 5th. The bikes were VERY loaded. Believe it or not, we sent two boxes of stuff home from Sundance, including clothes and souvenirs and gifts, and we still have more crap on the bikes today than when we started the trip. 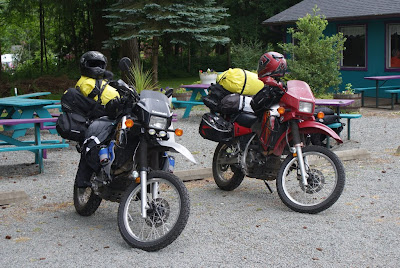 Our first day on the road was pretty uneventful. We went over North Cascades highway, and ended up getting a hotel room in Tonasket for the night. No particular reason, just convienient. We did stop and take a few pics at a waterfall going over the North Cascades: 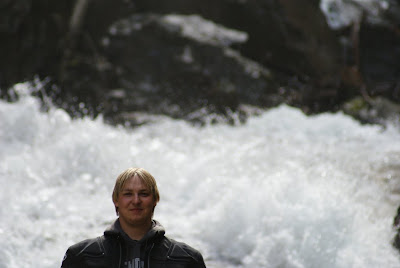 I like this particular pic because it looks like Joe’s standing in front of an oncoming flood.

Now, I’ve never been one to claim that my memory is that good, but I’m a bit surprised to find that I don’t have any pictures from the 6th. In all fairness, it was a kind of a long day, and it was familiar territory.

Moving on… On the 7th, we left out of Libby, MT. to drive through a seldom-used entrance of Glacier National Park, in preperation to drive the Going to the Sun Road on the 8th. Some very pretty scenery on lake Koocanusa, just outside of Libby.

I did get some pics of Glacier NP from that western entrance, but not really anything memorable. On the 8th, we really hit the park, and I did get some shots I was happy with.

This one is pretty cool. They call it the “weeping wall,” and if we had been headed the other direction, we would have gotten soaked. This whole section of the wall is just a continual waterfall, showering the west-bound lane of the road. I already posted my favorite Glacier pics here. 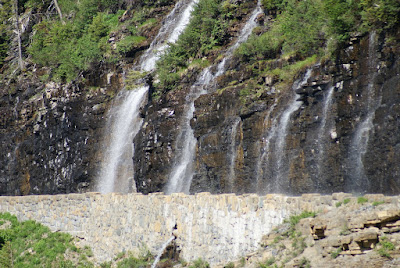 After Glacier, it was a very long, very boring, mostly very hot drive. Joe was in a hurry to get to his Mom’s, so we logged a 500+ mile day on the 8th, and went all the way down to Billings, MT. By the time we got there, it was dark, we were very sore, and very tired, and very determined not to have another 500 mile day!

The 9th was mostly just more heat, but we went through Little Bighorn Battlefield National Monument. They have a pretty neat display inside the visitor’s center, though everything is behind glass. It was fun watching folks with the cheap-o digital cameras trying to take pics. Score one for the expensive camera. This is a diorama of the battle.

In the past 20 years or so, the site (run by the National Parks Service) has undergone a pretty big change, even being renamed (it was formerly known as Custer’s Last Stand National Monument). There is a lot more from the Native American’s perspective now, including this outdoor sculpture:

We also had our first “incident” at Little Bighorn Battlefield Park (LBBP). Once we crossed the Washington / Idaho border, helmets become optional. While we would never ride on the highway or in a busy city without a helmet on, we did take advange of this in a few instances… Moving bikes at a hotel, moving from the gas pumps, etc. Well, LBBP was about the half-way point of our day. Our day of riding in 100+ degree heat in full gear (jackets, riding pants, gloves, etc.).

There is a 5 mile loop through LBBP, with pullouts, plaques, memorials, etc, with a 20mph speed-limit, so we decided we were going to cool off a little bit, and ride that loop sans-helmet. We secured our helmets to the back of our bikes, and proceeded to ride the loop, and out of the park to a gas station right by the freeway. No incidents, no cracked skulls, or any such thing. After paying for some ice & water inside the store, Joe found that his helmet was missing. We both feared that someone had snatched it from his bike while we were in the store, but we figured we’d ride back through the park to see if we could find it, just in case. Luckily, a very nice lady on a Harley Davidson had caught the glint of the shield in the grass, and picked up the helmet, and their traveling companions on a Goldwing remembered seeing is riding. They were on their way to turn the helmet over to a park ranger when we rode by them. So, Joe’s lid was scratched to hell, and had some missing plastic, but was still serviceable until we could get a city and get a replacement. The thought of driving the 60+ miles on a freeway to a city without him having a helmet was scarey as hell!

We made it to Joe’s Mom’s house in Sundance that night. The next day, we went out (by car!) to Devil’s Tower in Wyoming. A pretty cool place. I had no idea that there was a huge prarie dog city out there. Got some cool shots of those little guys. They barked up a storm, and wanted to be fed 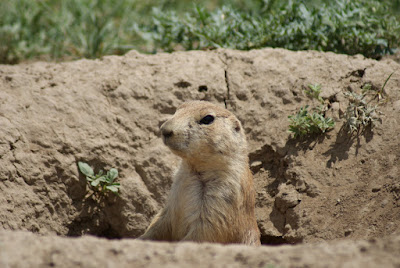 Devil’s Tower itself was pretty spectacular. For some reason I kept thinking about mashed potatoes the whole time, but I digress… 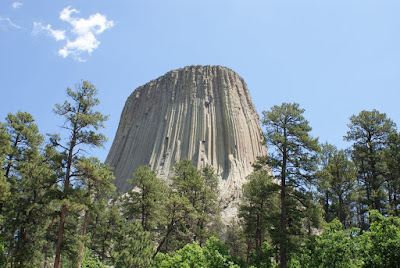 The 11th we had a nice light day. We got to sleep in a bit, and headed out to historic Deadwood, SD for some good old-fashioned gambling. No big wins, no big losses, but air-conditioned! On the way there, Joe’s mom took us out to the Roosevelt Monument. Basically this big rook-looking thing up on a mountain overlooking half of South Dakota. Even the Panorma doesn’t realy do it justice, but here it is anyway. It’s nine full-size pics, and the source file is huge. I’ll play with it a bit more when we get home, and I have a 22″ monitor, instead of my 12″ laptop.

So this is going to conclude part one of the adventure. I’ll continue this soon, as we’ll be home in a few days, and it will be a LOT easier to edit photos, and write with a real monitor, a
nd a real keyboard, and for heaven’s sake, a MOUSE instead of a touchpad. Oh how I miss my cable internet.